Follow the suggestions in these topics to help resolve common issues with Pentaho Metadata including the Metadata Editor and the Pentaho User Console components which auto-generate metadata models:

In the sample preview below, the entries, 1, 2 ,3, and 4 listed under in TABLE4 are taken and outer-joined with the records in the two other tables. The three other tables contain fewer records. The relationships are defined, but now the order of execution is critical. Relationship A is executed first, followed by B, and then C.

The nested join syntax that is generated forces the order of execution:

Other orders of execution are just as valid depending on the business context to which they are applied. Another order of execution will generate a different result. To allow business model designers to ensure that user selections are executed in a specific way, a Join Order Key is added to the Relationship Properties dialog box. 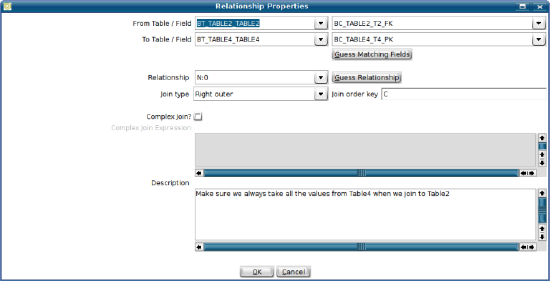 The join order key is relevant only in instances in which outer joins are deployed in business models. To make the importance of the execution order apparent, this information is displayed in the graphical view of the model.

It is not mandatory to use uppercase letters, (A, B, C, as shown in the first image), to set the order in which tables are executed. Any alphanumeric characters (0-9, A-Z) can be used. The system will calculate the ASCII values of each character; the values are then used to determine the order of execution. In the example, A, B, C, AA, AB, Pentaho Metadata Editor will execute the table relationships in the following order: A, AA, AB, B, C.

Beginning in version 5.0, inner joins are resolved before outer joins. If you have several tables that require outer joins, the order in which the tables are joined is critical because different join orders produce different results. To make the join order consistent, set the Join Order Key field in the Relationship Properties window. For more information, see Managing Outer Joins.